Today I ran into a problem which could easily solved using a short WMI query. The problem was that the query must be executed within a Java UI application. Googling for a solution I came only up with either quite some ugly workarounds (like generating a VBScript fragment, forking off the VBScript runtime and parsing the result) or some full blown COM/DCOM interfaces (like J-Integra or J-Interop). Although I really like J-Interop (we are using it for DCOM when accessing OPC server in OpenSCADA Utgard) it has some drawbacks. For J-Interop every access (even local access) is a network based access. Since J-Interop only supports DCOM it is free of any platform specific code but required the machine to be accessible using “remoting” functionality (DCOM). Since I wanted to query the WMI from a UI application and I am sure that the WMI query will stay on the Win32 version of the application I was not keen on adding “remoting” as a requirement to the UI application.

After some digging I remembered that SWT brings an OLE interface which provides direct COM access. So I started poking around and finally come up with a solution that works quite well. 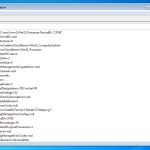 For the impatient: The full source code is available from github https://github.com/ctron/wmisample and the screenshot is here.

END_OF_DOCUMENT_TOKEN_TO_BE_REPLACED

I just stumbled over a strange issue when installing an additional plugin into a fresh Eclipse installation:
An error occurred while collecting items to be installed
session context was:(profile=SDKProfile, phase=org.eclipse.equinox.internal.p2.engine.phases.Collect, operand=, action=).
No repository found containing: osgi.bundle,org.eclipse.team.cvs.ssh,3.2.100.I20090508-2000

I was unable to add any new plugin and searching Google for help was not successfull. There was an issue somewhere in the Eclipse Bugzilla that the plugin org.eclipse.team.cvs.ssh was optional and no longer installed or required. Seems that P2 thinks the somewhat required for the installation process.

ButI found one hint that deactivating the option “Contact all update sites during install to find required software” helps. And it did.

Today I tried to create a combo viewer in Eclipse with a different approach than the it seems the widgets was designed. I have an object which has to main properties an ID and a descriptive name. While this is nothing unusual following requirements seems to be:

Reading an object from an ObjectInputStream is easy. But using OSGi it can be a little bit more difficult. Due to the class loader system of OSGi the ObjectInputStream might not know the class that was stored. Assume you have a Bundle A, B and C. B provides the storing capabilities that stores objects somewhere and C provides the data object itself. Now if A tells B to store some object from C this will not be a problem, since the object class is attached to the object instance. But reading back the object will result in a ClassNotFoundException since B has no reference to C and therefore does not know any classes of C.

One solution of course would be to add a dependency from B to C. But that is probably not what you want. Another way would be using Eclipses “Buddy” policies workaround for problems like this. In this case the bundle B would declare itself capable of working with the buddy system and C would declare itself a “buddy of B”. This turns around the reference. While this is a possible way if you cannot change the logic in B (like existing third party libraries that have to be used) it also has some drawbacks. First of all you commit to using Eclipse/Equinox since this is not covered by OSGi. Also you still have to declare those dependencies from C to B.

On the other hand you can sub-class the ObjectInputStream and override “resolveClass” to let the bundle resolve the class instead of the “current” classloader. Passing the bundle A to that input stream you would have all the classes you need.

Check out the following sample implementation:

Although Equinox offers some sort of remote TCP console it is not what you actually want to have. Being limited to one session, having not authentication and allowing the user to execute any command and shut down the OSGi container is not an option for a productive system.

In OpenSCADA we faced the same problem so we simply developed an OSGi Remote Console based on Apache Mina.

Our equinox console works around the limits of the original OSGi TCP console and can simply be dropped in as a replacement.

SVN Link to the project: http://pubsvn.inavare.net/openscada/modules/aurora/trunk/org.openscada.osgi.equinox.console/

Also we played a little bit with an IRC bot that exposes the OSGi console of Equinox to an IRC server. This is not really tested and just a proof of concept. But it works. If you like check out http://pubsvn.inavare.net/openscada/modules/aurora/trunk/org.openscada.osgi.equinox.ircbot/ and play with it ;-)